This step-by-step tutorial series will teach you the basics of building an ASP.NET Web Forms application using ASP.NET 4.5 and Microsoft Visual Studio Express 2013 for Web. 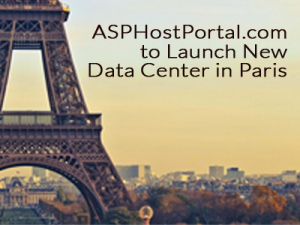 This series of tutorials guides you through the steps required to create an ASP.NET Web Forms application using Visual Studio Express 2013 for Web and ASP.NET 4.5.

Comments are welcome, and we’ll make every effort to update this tutorial series based on your suggestions.

You can download a C# project that contains the completed tutorial.

The ASP.NET Web Form features presented in this series include:

Tasks demonstrated in this series include:

The specific latest ASP.NET 4.5 features provided in this Web Forms tutorial series include the following:

The following screen shots provide a quick view of the ASP.NET Web forms application that you will create in this tutorial series. When you run the application from Visual Studio Express 2013 for Web, you will see the following web Home page. 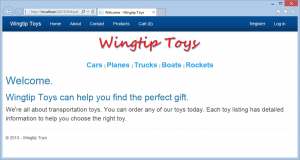 You can register as a new user, or log in as an existing user. Navigation is provided at the top for each product category by retrieving the available products from the database.

By selecting the Products link, you will be able to see a list of all available products.

You can also see individual product details by selecting any of the listed products. 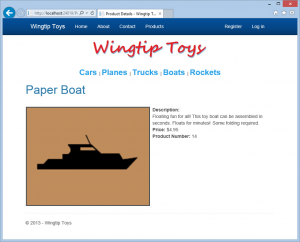 As a user, you can register and log in using the default functionality of the Web Forms template. This tutorial also explains how to login using an existing Gmail account. Additionally, you can login as the administrator to add and remove products from the database.

Once you have logged in as a user, you can add products to the shopping cart and checkout with PayPal. Note that this sample application is designed to function with PayPal’s developer sandbox. No actual money transaction will take place. 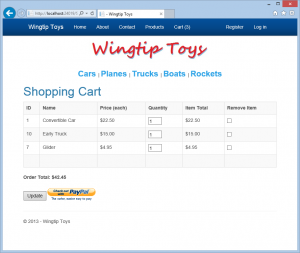 PayPal will confirm your account, order, and payment information. 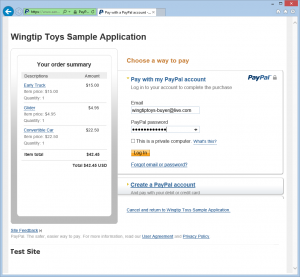 After returning from PayPal, you can review and complete your order. 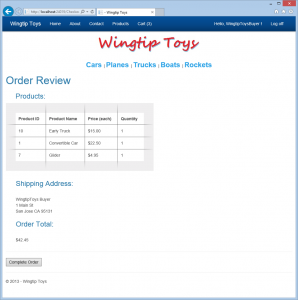 Before you start, make sure that you have the following software installed on your computer:

This walkthrough assumes that you selected the Web Development collection of settings the first time that you started Visual Studio.

After installing the prerequisites, you are ready to begin creating the new Web project that is presented in this tutorial series. If you would like to optionally run the sample application that this tutorial series creates, you can download it from the MSDN Samples site. This download contains the following:

If you already have a folder named WingtipToys in your Projects folder, temporarily rename that existing folder before renaming the C# folder to WingtipToys.

Use the Q AND A section included with the Getting Started with ASP.NET 4.5 Web Forms and Visual Studio 2013 – Wingtip Toys (C#) sample for any questions or comments.

When an error happens during development, or if the Web site does not run correctly, the error messages may give complex clues to the source of the problem or might not explain how to fix it. To help you with some common problem scenarios, you can also use the ASP.NET forums or the Q AND A section included with the Getting Started with ASP.NET 4.5 Web Forms and Visual Studio 2013 – Wingtip Toys (C#) sample. If you get an error message or something doesn’t work as you go through the tutorials, be sure to check the above locations.