Microsoft has release a huge update for developers which is called ASP.NET 4.6. Microsoft ASP.NET 4.6 is the next version of the widely popular managed runtime environment from the software giant. ASP.NET 4.6 ships with Visual Studio 2015 preview and includes some exciting new features and enhancements. The list of new features and enhancements is a mile long, not the least of which is the availability of Visual Studio 2015. Here are a few items that stand out as the most exciting according to ASPNETHostingNews.

Of course this is a big one. Visual Studio is by far the best IDE available for building software in my opinion. With Visual Studio 2015, the system is designed to take advantage of some major shifts in the development process being introduced by ASP.NET 4.6 and the upcoming ASP.NET vNext.

What’s special about the new Community Edition is that it’s replacing the old Express versions of Visual Studio but is much more capable. In fact, it’s basically the Pro version of Visual Studio for Free! Among the new features in 2015 is the ability to develop for Android and iOS via a partnership with Xamarin in addition to normal Windows development. Other highlights include real Git integration, code refactoring, improved performance profiling, and edit/resume capability during debugging. 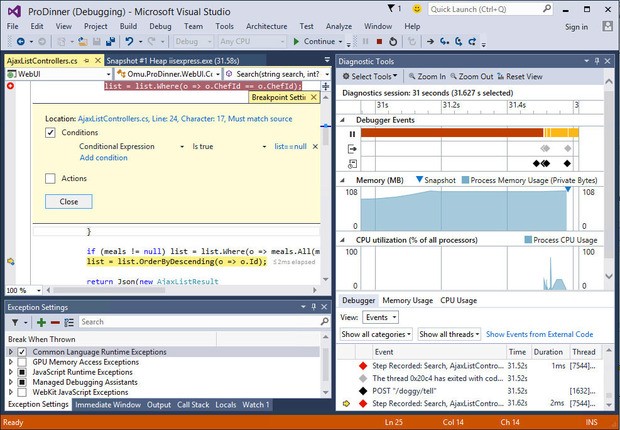 here is a lot new under the hood, but my two favorite new capabilities are string interpolation and the null conditional operator. While both are small items, if you do any amount of C# coding you’ll know immediately why these make us happy.

After 6 years of development, the new Rosyln compiler is launching with .NET 4.6. Rosyln is a move away from the traditional black box compilers and, keeping with Microsoft’s new mantra, is open source.
What’s cool about Rosyln is that it allows anyone to tap into the compiler to build their own tooling and custom processes. Rosyln will also usher in real time, dynamic code compilation and syntax checking – something I’m very much looking forward to.

These are but a few of the plethora of new features in this release. There are new versions of Entity Framework, an improved Garbage Collector, a new Just-In-Time compiler streamlined for x64, and a whole lot more.

HostForLIFE.eu is European Windows Hosting Provider which focuses on Windows Platform only. They deliver on-demand hosting solutions including Shared hosting, Reseller hosting, Cloud hosting, Dedicated Servers, and IT as a Service for companies of all sizes. They costumers from around the globe, spread across every continent. They serve the hosting needs of the business and professional, government and nonprofit, entertainment and personal use market segments.