The .NET Framework has exploded to include so many technologies (WCF, WPF, ASP.NET, etc.), features, and options. With .NET 4.5, there have been many updates to the core languages, with the asynchronous programming receiving lots of coverage.

If you plan to build Windows 8 applications, then you want .NET 4.5, because it has a subset called .NET for Windows Store. Building Windows 8 applications means you will be using HTML5 and CSS3, which are embraced by ASP.NET 4.5 and Visual Studio 2012. Web Sockets support has been added, as well as the ability to bundle JavaScript libraries/code and minimize the size of its download. ASP.NET Web Pages 2 provides more features for building pages on the fly, and improvements have been made to Web Forms and MVC. These features and more can be used to build powerful applications via the Visual Studio 2012 IDE. However, you can still target any version of the framework — that’s right, you are not forced to upgrade to .NET 4.5.

Figure A shows the welcome screen of Visual Studio Ultimate 2012 installation. Microsoft stated performance improvements are a key goal of Visual Studio 2012; this includes reducing the clutter of the developer’s workspace, which theoretically allows them to better focus on their work. The IDE now loads solutions asynchronously with key parts loaded first. Visual Studio 2012 does start up faster than Visual Studio 2010, but I’m not sure Microsoft succeeded in its goal to reduce clutter. The IDE opens with fewer windows like errors, classes, server explorer, and so forth, but these can easily be opened via the View menu, which was an option in previous versions of Visual Studio. There are indeed useful features that are designed to make things like previewing files without opening them easier. 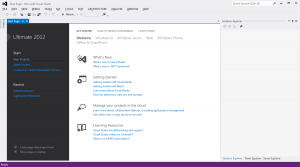 Another interesting feature of Visual Studio 2012 is the inclusion of LightSwitch, Silverlight, and Expression Blend. The first two are project types within the IDE as shown in Figure B (among the many other project options). Expression Blend is installed as a separate application in the Visual Studio 2012 directory, but it is available only for Windows Store app development on Windows 8. 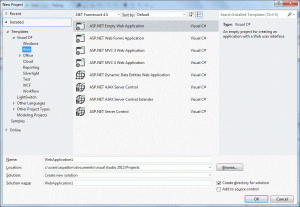 Options for creating a new Web application in Visual Studio 2012

Figure C shows an ASP.NET Web Pages project opened in Visual Studio 2012. It is not a major shift from Visual Studio 2010, but you may notice the browser and DocType options just below the main menu. For this project, Google Chrome is selected as the target browser, but this drop-down list is populated with the browsers installed on the development machine so you can test with a variety of browsers. The DocType allows you to choose the target standard; HTML5 is the default for new projects, but you can target others depending on the project. In the IDE, you might also notice the menu options along the top — Website, Build, Debug, Team, SQL, Tools, and more; these options may change depending on the version of Visual Studio installed, but they do give a glimpse of the many things you can do within Visual Studio 2012.

Working with an ASP.NET Web Pages 2 project within Visual Studio 2012

Integration with other Microsoft products

A key aspect of developing with Microsoft technologies is the tight integration with other Microsoft products. Visual Studio 2012 simplifies this by providing the environment to build applications that use these products. The following list provides a sampling of the possibilities: